A catalyst has a seemingly magical quality: It can speed up the pace of a chemical reaction, perform that feat thousands of times, and never get used up. That’s why some ENSI scientists are striving to find ways to use catalysts to manage energy.

First, though, they must understand how catalysts perform their tricks, and what gives them their special abilities. It isn’t magic after all; it relates to the size and shape of the catalyst, and the tiny movements its atoms make at the nanoscale. 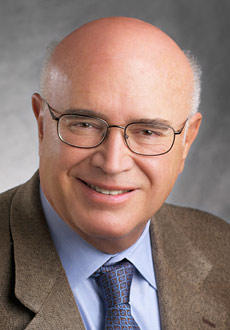 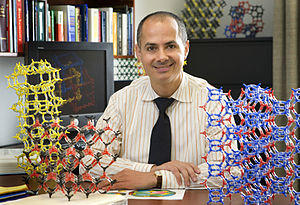 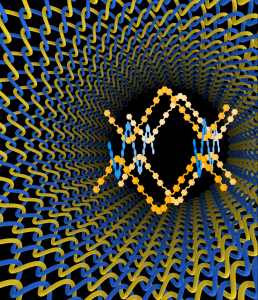 An image of a covalent organic framework called COF-505, which Yaghi “wove” together with helical organic threads, a unique fabrication technique.

In this case, the “bricks” are really a scaffold that surrounds a space, making a compartment. Yaghi points out that he can vary the “bricks” in many ways to make different kinds of structures. He can then dangle particular molecules near spaces in the framework. The metal atoms in the framework act as sites of catalysis, to which the molecules can bind and interact.

“You want a catalyst to be stable while at the same time you want to be able to tweak it,” says Yaghi, explaining why the compartments with their scaffolds give MOFs an advantage. Different parts of the scaffold can be constructed differently. “It allows you to catalyze different reactions, and catalyze them very specifically.”

So far, scientists have only scratched the surface of what these frameworks can do, but there are already some inspiring examples. For instance, MOFs are currently being used to transport natural gas in half, or even one-third of the space normally required. The high surface area of the framework attracts the methane molecules, compressing them together, allowing more methane to be stored in a smaller space.

These frameworks might also serve as a way to make use of the overly abundant carbon dioxide in the atmosphere. Yaghi describes what he’s been able to do with a COF, or covalent organic framework, which is basically the MOF without the metal. “We’ve been able to store CO2 and to carry out a transformation of CO2 into CO,” he says. “CO is the starting compound for many industrial chemicals. So the idea is to learn how to convert carbon dioxide to a high-value substances.”

Being able to transform carbon dioxide into other, useful chemicals would be a great environmental boon. But in order for scientists to create the structures to make the necessary chemistry feasible, they need to understand how to design catalysts that can accomplish tasks such as self-correcting and coding information.

The chemistry of MOFs and COFs promises to allow for precision crafting of frameworks where specific chemical transformations can be carried out. “These are properties that biological systems thrive on, but we can’t yet do that with our synthetic systems,” says Yaghi. The Kavli ENSI’s support is vital to making discoveries in this regard. “These are fundamental challenges that require new fundamental understanding.”

UC Berkeley chemistry professor and ENSI researcher Gabor Somorjai has been studying catalysis since he was appointed to his Berkeley post in 1964. “All catalysts work at the nanoscale,” he says, adding that surface area is very important, because surfaces are where catalysis and chemical transformations take place. If the size and shape of the catalyst change along with the composition of other compounds involved, “You change the surface area,” he notes, “and therefore, you change the chemistry.”

Somorjai has learned that the speed a catalyst lends to a reaction is related to tiny atomic movements. “The nanoparticles are not static and stable,” he explains. “All the atoms are in the right place, but it’s constantly mobile. That mobility is allowing the changes that must occur to make another molecule.”

While Somorjai is unraveling the threads of how catalysis works, ENSI’s co-director, chemistry professor Omar Yaghi, is creating new kinds of catalytic nanoscale structures. Yaghi, who is a molecular architect of sorts, invented and designs what he’s dubbed metal organic frameworks, or MOFs. MOFs are inspired by the way certain enzymes are structured: with tiny compartments where different types of transformations can take place.

In a MOF, Yaghi explains, “metal and organic components alternate in many different ways to make up the entire construct. You can imagine building a home out of bricks. One brick is metal another is organic, and they come together in a particular way to make a particular structure.”