A few billion years ago, cyanobacteria, sporting the first chlorophyll molecules, performed an amazing feat; they captured the energy in sunlight and stored it in the chemical bonds of newly forged molecules.

Nature’s had a long time to refine and customize this energy-conversion act, and we humans marvel at its efficiency. If we could use the sun’s rays as effectively, we could address many of the world’s energy concerns. But right now, even our most impressive commercial solar panels capture less than 25% of sunlight’s energy.

Nature has given us these systems for free. We just need to figure out how to best use them.
UCB chemistry professor Birgitta Whaley

Researchers at ENSI are working to emulate nature’s photosynthetic adeptness. Some are inventing new nanostructures to aid in the process. Others, such as Profs. Birgitta Whaley and Graham Fleming, aim to better understand and make use of—and expand on—the light-capturing process itself.

In low light, plants are able to use about 90% of the photons they absorb to initiate photosynthesis. They sacrifice some of this efficiency, though, when the light is stronger, because all those photons keep the chlorophyll busy. The plant ends up dumping valuable light energy as heat.

This process works fine for serving the needs of a plant, Whaley points out, but not of a human society. So, while chlorophyll and photosynthesis can be quite efficient, the system as a whole can be improved upon.

Whaley’s long-term vision involves leveraging the variety of ways in which different organisms photosynthesize. For example, some bacteria survive by tapping into heat—infrared radiation—from deep sea vents. Whaley points out that joining the plant and the bacterial systems would expand the energy-gathering range beyond visible light. “If we’re designing artificial systems,” she says, “there’s no reason why we shouldn’t increase the bandwidth.

There’s also no reason not to combine the exquisite front end of photosynthesis with a back end tailored to a specific energy need. “We don’t want to mess with the part that absorbs light,” Whaley says. “We want to take that and use it to make a hybrid device.” She imagines taking nature’s light-gathering machinery and embedding it in a membrane that includes nanoscale structures designed to produce only a specific, desired energy-rich substance.

UC Berkeley chemistry professor and MacArthur fellow Peidong Yang is leveraging nature in a different way. He’s created a structure that can capture the energy in light and then transfers that energy to bacteria, which forge the bonds of energy rich-molecules. But rather than the glucose that plants and bacteria produce, Yang’s system makes hydrocarbons such as acetate or methane, the primary component of natural gas. And just like natural photosynthesis, Yang’s system uses carbon dioxide to obtain the carbon and oxygen atoms that become incorporated in more complex organic molecules. 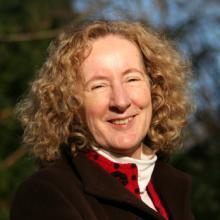 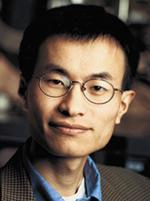 Thus, Yang’s system has the potential to not only provide a new energy source, but to absorb greenhouse gases as well.  Here’s how it works: the process begins when sunlight hits a “forest” of nanowire silicon and titanium dioxide “trees.” They serve a similar function to chlorophyll, providing electrons that can be energized when hit by photons of sunlight. In a plant, these excited electrons go through the rest of the photosynthetic machinery, eventually producing compounds that become glucose.

In Yang’s system, though, the electrons are shuttled to a bacterium, Sporomusum ovata. S. ovata uses the energy from the electrons to turn carbon dioxide into acetate, which can serve as the base for manufacturing many useful chemicals. But the end goal is specific energy-rich molecules. So Yang and his team feed the acetate to genetically engineered strains of E. coli, which use it to synthesize the desired end products.

Yang still has work to do to get the system to a rate of efficiency that will make it commercially viable. Currently, the efficiency of his energy conversion system is about equal to that of a leaf. While that’s quite an achievement, the system needs to be more productive in order provide sufficient energy at a reasonable cost.

Professor Yang holds a sample of his light-capturing nanomaterial

A weak link, Yang believes, is relying on the catalysts within bacteria. For one thing, bacteria don’t live forever. And as with plants, the bacteria’s enzymes evolved for survival, not to supply humans with hydrocarbons. Yang is aiming to find a synthetic catalyst that can be more customized and directed.

For both Yang and Whaley, new molecular, biological, and nanoscale technologies open the door to methods of emulating photosynthesis that were previously thought impossible. “Photovoltaics has been going for a number of years, using the tools of physics,” Whaley points out. Researchers a decade or two ago couldn’t have imagined using tools like nanoscale silicon forests or mass-produced membranes. “Now we can think about how to use these new technologies,” she says. “We haven’t yet mastered them, but we can imagine what’s possible.”